The Debaters: Live On Tour 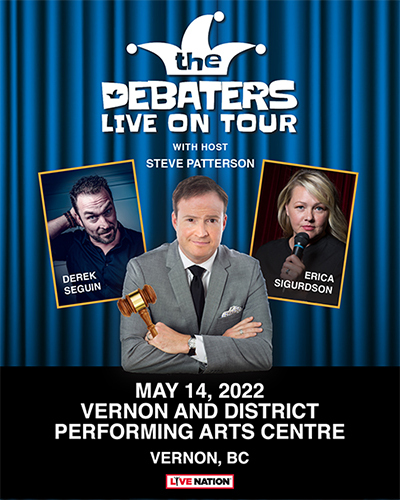 The Debaters Live on Tour is the comedy stage show where comics go toe to toe in a battle of laughs and logic and the audience picks the winner. The 2022 spring tour features host Steve Patterson and two of Canadaâs top headlining comics, Erica Sigurdson and Derek Seguin performing stand-up and two hilarious debates in everyoneâs favourite comedy debate format.

Expect to be showered with jokes at this two-hour laugh-fest for live audiences only! The show features two blooming-well hilarious debates in the format familiar to fans of the hit radio smash, The Debaters. Lots of flowery language plus bonus segments of smart stand-up comedy from Steve as he and his hilarious cohorts put the petals to the metal in a show where laughs rain supreme. Dew get your tickets today!

Disclaimers:
Due to the spontaneous nature of live performances, some language may be inappropriate for younger audience members.
This is not a CBC production and will not be broadcast.

Tickets are available online at Ticketseller